The Selmer guitar is an acoustic guitar best known as the favoured instrument of Django Reinhardt. Selmer, a French manufacturer, produced the instrument from 1932 to about 1952.

In 1932, Selmer partnered with the Italian guitarist and luthier Mario Maccaferri to produce a line of acoustic guitars based on his unorthodox "Grande Bouche" (big mouth) or D-hole design. These were widely known by musicians and owners in Britain by their model name rather than the manufacturer, hence they are commonly referred to as Maccaferri or Selmer-Maccaferri guitars. The D-hole was initially designed to accept an internal resonator, invented by Maccaferri, which was designed to increase the volume of the guitar and to even out variations in volume and tone between different strings.

Although Maccaferri's association with Selmer ended in 1934, Selmer continued to develop the guitar (abandoning the resonator) and in 1936 the definitive version of Selmer guitar, the 'Modèle Jazz' was launched. It became known as the "Petite Bouche" (small mouth) or "Oval Hole".

The "Petite Bouche" model has an especially loud and cutting voice, and remains the design preferred by lead players in Django-style bands, while the accompanying rhythm players often use D-hole instruments. This was the lineup in Django's Quintette du Hot Club de France during its classic period in the late 1930s, and it remains the pattern for bands that emulate it, although it should be noted that Django used the 12 fret-to-body D-hole model until about 1936, after which he favoured the recently introduced 14 fret to body oval hole model. 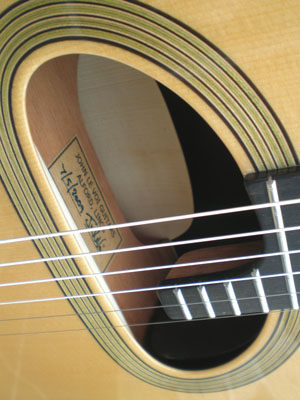 The sound of the D hole models, of either configuration, is typified by a bright attacking treble and a pronounced mid range. The large soundhole, when used without any of the early model's internal structures, raises the resonant frequency of the guitar body and contributes to an aggressive open sound. Some players like this tone quality for soloing and the 14 fret-to-body model gives good access to the higher frets. 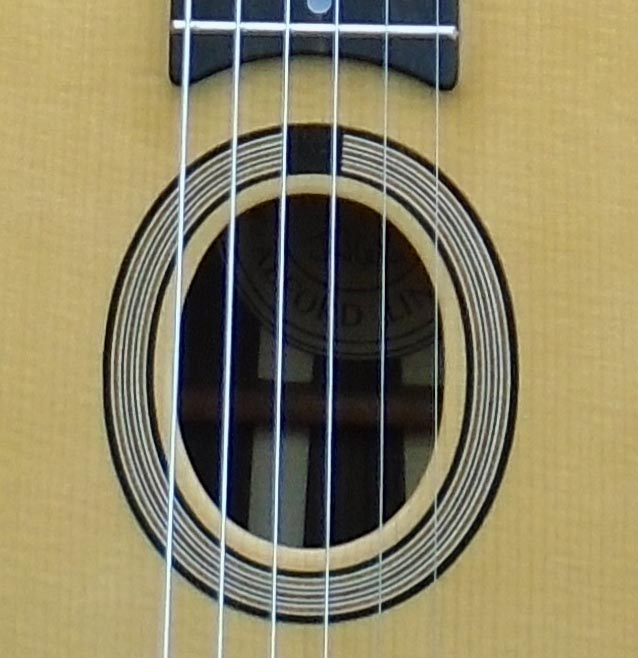 Tonally, the oval hole models are the best balanced. They have the punch and projection produced by the unique soundboard construction together with warmth to the bass. This is a result of the relatively small soundhole, which lowers the resonant frequency of the guitar body.